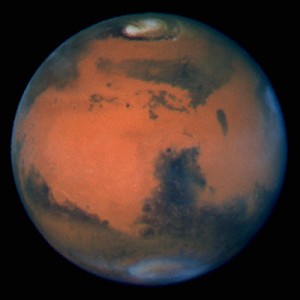 Mars is the fourth planet of our solar system and the last of the terrestrial planets. It has a diameter about half the size of Earth’s diameter, a lower mean density and holds only 38% of Earth’s gravitation. The atmosphere of Mars is very thin and consists mostly of CO2. It’s surface pressure corresponds to less than 1% of Earth’s pressure at sea-level. Due to the great distance between Mars and Sun which causes low temperatures and the thinness of Mars’ atmosphere, liquid water cannot be found on Mars’ surface. Because of the low atmospheric pressure, water exchanges directly from frozen into the gaseous state. People act on the assumption that Mars’ atmosphere was essentially more dense in former times and due to the “greenhouse effect” even warmer than today. The required CO2 was provided by the high volcano action. By and by the atmosphere thinned down and possible existent lakes froze. Due to the low escape velocity (the velocity a particle needs to exit the gravitational field of a body)  of about 5 km/s (Earth: 11 km/s) a large part of the water and the atmosphere is escaped until now. Today visible frozen water exists only as ice polar caps, which emerge from under frozen CO2 ice caps in the local summer of Mars, and in deep craters on Mars’ surface.