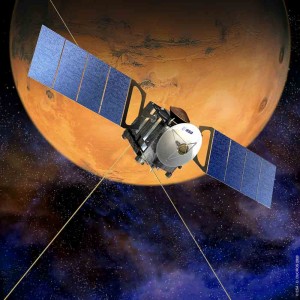 Besides the member states of ESA also Poland and the USA are involved. Main agent for Mars Express is the company EADS Astrium, France. The responsible project group is an ESTEC team in Noordwijk, Netherlands. Starsem in Russia was responsible for the rocket, while Alenia Aerospazo, Italy, was responsible for the satellite integration. Germany is decisive involved with the High Resolution Stereo Camera HRSC and the Mars Radio Science Experiment (MaRS). Additionally Germany is partly concerned with the Planetary Fourier Spectrometer (PFS).

The planet Mars is an object of fascination already for hundreds of years. But the possibility  to investigate the planet with spacecrafts exists just since 40 years. The aim is to achieve statements about the differences between the planets in the Solar System and to understand their common origin. The first spacecrafts to Mars started in the sixties; the first global investigation was performed by mariner-9 in 1971. One of the most important missions was the Viking mission from 1976 to 1982 with two orbiters as well as two landers.

The spacecraft mars Express contains seven scientific instruments. All measurement devices collect data about Mars’ surface and atmosphere. The orbit allows an approximately complete covering of Mars’ surface during the first mission period of about one Mars year which corresponds to approx one Earth year.

Scientific aims of the orbiter 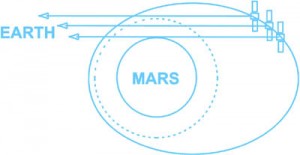 MaRS uses the signals which transfer the data and the instructions between spacecraft and Earth in order to investigate the ionosphere, the neutral atmosphere, the surface and even the interior of Mars.
The information about the interior of the planet is provided by the precise determination of the gravity field. The velocity of the spacecraft changes due to the gravity field what can be detected in the radio signal.
Knowledge about the nature of the surface can be obtained by reflection of the radio waves on the surface  (“Bistatic Radar”).