Normally direct observation of an exoplanet is not possible because the star orbiting the exoplanet has a much greater luminosity than the planet. The star outshines all faint bodies in its vicinity. Only in young systems gas and dusk from the stellar disk reduce the luminosity of the stellar object making the direct imaging of planets on large orbits possible.

In particular, two methods have led to the discovery of most of the currently known exoplanets.

If a planet on the orbit around the star passes in front of its star, as seen from Earth, this is called a transit. During this transit, the planet obscures a small part of the star and produces a small short and periodic brightness decrease in the intensity of the starlight (Figure 1). 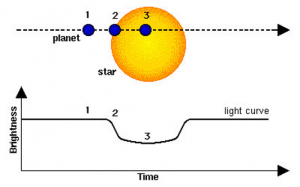 A transit of a planet as large as Jupiter orbiting a sun-like star produces a decrease in intensity of the starlight of about 1%. Smaller rocky planets with a radius comparable with the radius of our Earth produce transits with a depth of 0.01%. These planets are detected in long uninterrupted observations of the stars by taking advantage of the periodicity of the transits.

Therefore, CCD sensors as used in normal digital cameras are build-in space based telescopes. The space telescopes take pictures of the star in periodic time intervals (30 seconds to 30 minutes). A timeline of the flux intensity of the star, a so called light curve, is calculated using all these images.

Day/Night change and cloudy skies prevent a continuous observation with ground-based telescopes. Moreover, the resolution of light curves recorded with ground based telescopes is limited because of the disturbing atmosphere of the Earth. Therefore, space telescopes like CoRoT and Kepler were used so successfully to detect exoplanets. From space a continuous observation unobscured by atmospheric disturbances is possible. Only this way the detection of small Earth like exoplanets is possible.

However, not only planetary transits cause changes in the brightness of the star. Especially high-resolution light curves of stars (Figure 2) show stellar pulsation, star spots and eruptions which exceeds the depth of a planetary transit by many times. Moreover, stellar companions of the star or binary stars in the vicinity of the target star can produces transits, which may be mistakenly confused with planetary transits. Therefore, first variations must be removed and transit of binary stars have to be identified.

If several periodic planetary transits are discovered in a stellar light curve, properties of the planetary system can be determined. With full knowledge of the stellar parameters combined with the retrieved orbital period of the planet around the star and the duration of the transit the distance between planet and star can be calculated. The radius of planet is calculated using the depth of the intensity drop of the light curve and the stellar radius of the star.

The shape of the transit can indicate properties of the planet as mass distribution, rings, moons etc..

However, one feature important for the full characterization of the planet is normally not retrieved directly from the light curve: the mass of the planet.

For this reason, the transit method is used together with the radial-velocity method.

Strictly speaking planets do not circle around the central star. In fact, planet and star circle around their common center of gravity. This point is called barycenter. The center of mass, however, lies very close to the center of the star because the mass of the star is much larger than the mass to the planet. Therefore, the star does not stand still but revolves around this common center of gravity with the same period as the planet. As seen from Earth the star moves alternately away and towards the viewer. 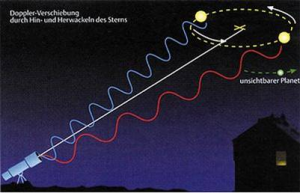 This movement results in a Doppler shift in the spectrum of the emitted starlight. The light is shifted toward blue when the star approaches the observer and toward red when the star moves away (Figure 3). The same effect exists in the audible range. When a vehicle with siren approaches an observer the siren sends a high tone When the car passes and moves away the siren sends a deeper sound.

The higher the speed of the star, the greater is the measured Doppler shift of the spectrum.

If the companion has a larger mass and/or a shorter distance to the star, the measured Doppler shift and therefore the measured speed of the star toward the observer is larger. Specially developed spectrographs on large ground-based telescopes such as HARPS on the 3.6 m telescope at the ESO observatory in La Silla, Chile, can measure speeds of stars toward our direction accurately up to 1 m/s or 3.6 km/h.

Using this method one can determine not only the orbital period of the planet around the star but in particular the mass of the planet. However, since this method only measures the proportion of the speed of the star in our direction and the orbital inclination of the orbit relative to our line of sight is not known, only a lower limit on the mass (m * sin i) may be determined.

However, higher inclinations can be excluded if a transit is visible in the corresponding light curve. That way combining the radial velocity method and the transit method limits the inclination of the transit and the accurate mass can be determined.

Combining both methods allows a complete characterization of the planet and hence the physical evidence by using two independent measurement techniques.