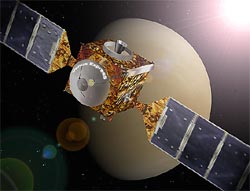 The spacecraft Venus Express was successfully  launched on the 9th of November in 2005 at the space mission launch center Baikonur in Kazakhstan with a Russian Soyuz-Fregat rocket. 153 days after launch it swung into an orbit around the planet Venus to start the observing mission. It was planned for Venus Express to observe the planet for approx two Venus years which corresponds to 500 Earth days. In the end the spacecraft was active until the end of the year 2013 and has provided much information about the planet Venus.

The first phase of investigation of the planet Venus by spacecrafts (1962-1985) was carried out by the missions Venera, Pioneer Venus and Vega which provided first descriptions of the physical and chemical conditions which dominate in the atmosphere and on the surface of Venus.
However there also arose many questions about the physical processes which lead to these conditions. A good part of this questions are unanswered until today. Extensive radar mappings through Venera 15 and 16 and the Magellan-Orbiter, combined with few pictures derived from landers, have considerably extended our knowledge about the geology and the geophysics on Venus. Now a similar systematic investigation is to be happen. In particular this hold good for the atmosphere beneath the clouds because there is almost no proper data considering this region until now. Many problems which are associated with the interaction between Venus’ atmosphere and the Solar wind are not yet solved. The basic secrets of Venus are associated with:

A powerful orbiter equipped with remote sensing and in situ measurement devices may now disclose those secrets. In comparison with previous spacecraft missions a break through is to be expected by using the spectral windows in the near infrared spectrum on the night side of Venus. These were first discovered in the late eighties:  Radiation of the lower atmosphere and the surface escapes into space and can be measured. Hence a combination of spectrometers and cameras which cover the spectral range from UV to thermal infrared, together with additional instruments as radar and a plasma analyzer, enables a sounding of Venus’ whole atmosphere from the surface up to 200 km altitude. However additional information about Venus’ surface can be collected to complete the Magellan mission.

The direct radio contact between spacecraft and the ground station on Earth is used for the radio sounding of neutral and media.

The scientific aims of the Venus Radio Science Experiment (VeRa) are: 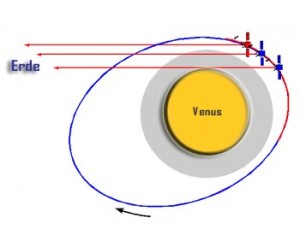 from ~ 80 km altitude to the ionopause (300 km to 600 km altitude depending of the state of the solar wind), in dependence of planetary latitude and solar wind to:

2) Radio sounding of the neutral atmosphere  from the cloud cover (35 – 40 km) up to 100 km altitude to deduce vertical profiles of the neutral mass density, the temperature and the pressure in dependence of the planetary latitude and the season as functions of local time.

(3) Measurements of the electric features, roughness and chemical composition of Venus’ surface using the reflection of radio waves on the surface (bistatic radar experiment) der dielektrische 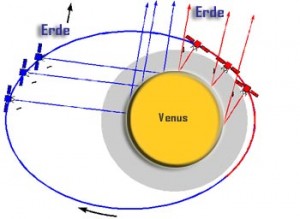 VeRa uses the radio carrier signal of the spacecraft in the X-band (8.4 GHz) and in the  S-band (2.3 GHz) which are transferred simultaneously by the high gain antenna (HGA).