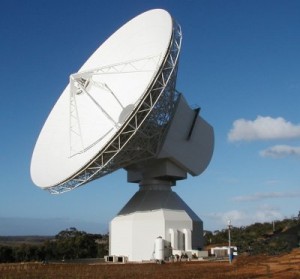 Radio Science investigates little changes in frequency (phase), amplitude and polarization of a radio carrier signal. The signal is broadcasted by a spacecraft, spreads in the interplanetary space and is finally received on Earth. The changes of the parameters of the radio signal result from the relative movement between spacecraft and ground station (Doppler effect), from the spreading through neutral (planetary atmospheres) or ionized media (ionospheres, sun winds and sun corona) or from reflection on planetary surfaces. Additionally the radio signals are used for communication between the spacecraft and the ground stations on Earth.

Commands for maneuvers are sent to the spacecraft via large antennae (uplink) and  the spacecraft sends saved information and scientific data back to the ground stations on Earth (downlink). Additionally continuous measurements of distance (range) and velocity (Doppler) of the spacecraft are performed.

In the ground stations the commands for the telecommunication get modulated to a carrier frequency for the uplink. In the spacecraft the uplink signal is received and demodulated and finally the uplink carrier frequency is used as frequency standard for the downlink. For the Radio Science experiments the TT&C-subsystems (Telemetry, Tracking & Command) of the spacecrafts are used. A simultaneous and coherent two-frequency downlink in the X-band (8.4 GHz) and S-band (2.3 GHz) separates the effects which result from the classical Doppler shift from those which result from the spreading of a signal through a dispersive medium (e.g. plasma).
The background noise of the radio signal and thus the precision of measurements is determined by the quality of the sending and receiving systems on board of the spacecrafts and in the ground stations. 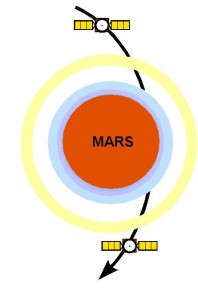 Uplinks are provided either in the X-band (7.4 GHz) for routine operations or in the S-band in case of an emergency (‘LGA’ Low Gain Antenna). In the coherent ‘two-way mode’ the on board received frequency is used to derive the downlink frequency.

The spacecraft sends a ‘dual-frequency downlink’ phase coherent in X-band and S-band simultaneously via the HGA. The ratio between X-band and S-band frequencies is typically a factor of 11/3.
If a firm phase relationship between two wave systems can be found, they are called ‘coherent’.  E.g. in the optic one finds that intensities are in general additive, i.e. no interference takes place between two light sources which originate from two different sources. The reason for this is that the difference of the phase constants is not temporally constant.

The ‘dual-frequency downlink’ is necessary to distinguish between the classical Doppler shift (due to the relative movement between spacecraft and ground station) and the dispersive media (due to the spreading of the radio waves through the ionosphere and the interplanetary medium). Additionally it is necessary to transfer both frequencies via the HGA to maximize the signal to noise ratio.
The Doppler effect is the apparent change in frequency of a wave due to a relative movement between source and receiver. The dependence between spreading velocity of a wave and the wavelength is called ‘dispersion’. Waves with different wavelengths (or frequencies) have different (phase) velocities.

The ‘Two-way radio link’ is applicable for coronal investigations.

The ‘One-way radio link’ is used for the occultation experiments.