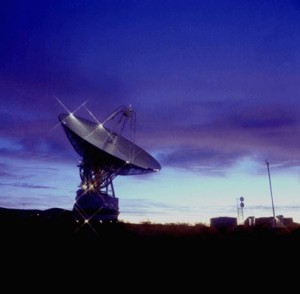 The scientific data and commands for telecommunication of the spacecrafts are received by the NASA antenna complexes of the Deep Space Network (DSN) and the new antennae of ESA in Perth (Australia) and Cebreros (Spain) in order to get processed further.
Interplanetary spacecrafts often depart several hundred million kilometers from Earth on their often quite complicated flight path. Additionally the size of a spacecraft is pretty limited due to technical and financial reasons. So the sending and receiving facilities on board can only send signals with little power towards the Earth. Therefore the effort to receive a good signal on Earth is the more. To filter the weak signal out of the general cosmic noise the ground stations are equipped with large satellite dishes. Particular low-noise receiving systems amplify the signal and change it to another carrier frequency for further processing. To smother the ground noise, the receiving systems are cooled down to 30 K which corresponds to -243 °C.

In order to send and receive data over longer time periods the motion of the antenna has to be very precise. The error resulting from the tracking of the antenna, the so called “tracking error”, must not exceed a few thousands up to a few hundredth degrees depending on the transmitted frequency.

The members of the ground stations are the new antennae of ESA in Perth (Australia, 35 m) and Cebreros (Spain, 35 m) and the Deep Space Network (DSN) of NASA (34 m and 70 m) with antennae complexes in California, Spain and Australia. When the spacecrafts are visible for the ground stations and the high gain antenna (HGA) of the spacecraft looks towards the Earth, the distance and the Doppler shift of the carrier frequency can be determined and hence the radial velocity of the spacecrafts. 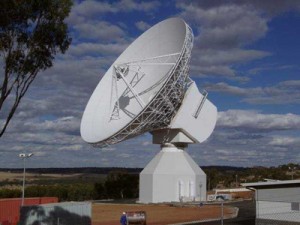 Approx one and a half hour’s drive north of Perth lies New Norcia on the west coast of Australia. There the ESA installed her new 35-m ground station in 2002. The operable antenna installation is controlled by the European Space Operation Centre ESOC in Darmstadt. The ESOC is responsible for all scientific missions of ESA. Therefore it has a network of various ground stations available in the whole world.

To keep contact to their spacecrafts beyond the Earth-Moon system, the american space agency NASA supports a worldwide communication network already since the beginning of  the space flight. 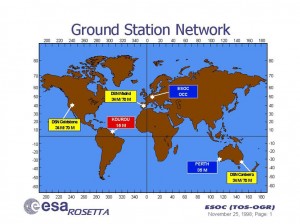 The Deep Space Network (DSN) consists of three complexes in Goldstone (California), near Madrid (Spain) and near Canberra (Australia). These are arranged such, that their distance to each other is approx 120 lines of longitude, so that the NASA is able to keep permanently contact to any spacecraft despite of Earth’s rotation. To this the communication is transferred from station to station in the course of a day. By the way the gigantic 70 m antennae of the DSN is not only used for communication with spacecrafts like Pioneer and Voyager, which have departed farther than Pluto from the Sun, but also for radio astronomical research e.g. for asteroid radar.