Meeting with a comet 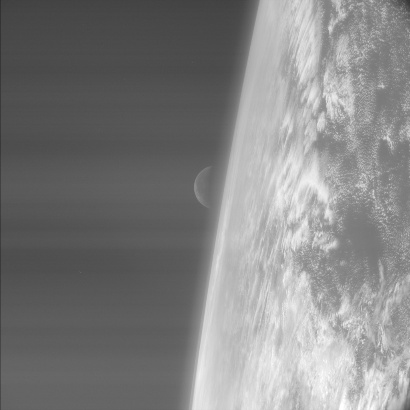 Image by the Rosetta camera from the 1st ‘swing-by’ maneuver of Earth and Moon
Source: ESA

The most difficult phase will be the approach and rendez-vous with the fast moving comet Churyumov-Gerasimenko. In August 2014 Rosetta achieve an orbit around the comet nucleus. Churyumov-Gerasimenko is a short periodic comet which recurs every 6,57 years. It was discovered in 1969 by Klim Churyumov (University of Kiev, Ukraine) and Svetlana Gerasimenko (Insitute of Astophysics Dushanbe, Tajikistan). Two approaches to Jupiter in 1840 and 1959 changed the comets orbit from initially 4.0 AU perihelion distance to 1.28 AU. The comet is a member of the so called Jupiter family (with the aphelion, i.e. the most distant pointof the orbit at the Jupiter orbit) which is a group of short periodic comets in the solar system.

Rosetta will escort Churyumov-Gerasimenko on its orbit till perigelion and hopefully beyond. The rendez-vous shall happen at a distance of 4.8 AU from the Sun, Rosetta will go into in August 2014. Because there is nothing known about Churyumov-Gerasimenko, neither its size nor shape nor mass are well known, the approach will be quite difficult. After the selection of a suitable landing place, one month after starting the global mapping phase at approx. 3.25 AU distance to the Sun, the orbiter will release the Philae lander of 100 kg weight to the comets surface. Due to the very low gravity, the landing speed must be very slow (1 m/s), otherwise the lander may bounce from or crah on the comets surface. The spacecraft will carry on orbiting the comet and follow its changes for more than 14 months. In this time Sun will have started to evaporate parts of the comet nucleus and the surface of the comet will outgas. Here one can investigate the behavior of a comet during approach and department (perihelion passage) and at its closest distance to the Sun for the first time.