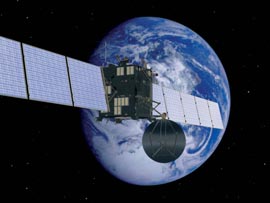 Rosetta is the first mission with the aim to accompany a comet over a longer time period and to investigate its nature.
On the 2nd of March 2004 the ESA spacecraft started its decennial journey to the comet Churyumov-Gerasimenko with an Ariane-5 rocket from Kourou, French-Guayana. Until its arrival on the comet in 2014, Rosetta will use several flybys on Earth and Mars (“swing-bys”) to get enough swing to reach the comet. The goal is to investigate the comet Churyumov-Gerasimenko at close quarters, to orbit around it for several months and finally to send a lander to the comets surface. Since the comet moves all along towards the Sun, it will the possible for the first time to investigate the changes of a comet during its journey about several million kilometers through the universe.  In addition Rosetta will pass two asteroids, Steins and Lutetia, on its way towards the outer Solar System, which can be investigated during this flybys.

Why fly to a comet?

The origin of the Solar System is unresolved in many respects. Thus the origins of comets and the relationships between comets and interstellar matter are investigated in order to draw conclusions for the origin of the Solar System. Because the cores of the comets are just a few kilometers big in size and consist mostly of ice and dust, they are often called “dirty snowballs”.
The origin of the long periodic comets is the so called Oort cloud, which is arranged spherical in a distance of approx one light year around the sun. The short periodic comets (which orbit faster and with shorter periods around the sun) presumably originate from the Kuiper belt, which is a flat and discoidal region beyond Pluto. There they reside to some extend in a manner of cosmic freezer due to the large distance to the sun and hence consist of the primary material from which our Solar System developed some 4,6 billion years ago.

‘Gravity field measurements for a comet’

‘Investigation of the comet coma’

Meeting with the comet 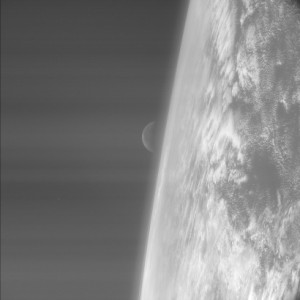 Recording from the Rosetta camera during the 1st ‘swing-by’ maneuver of Earth and Moon
Source: ESA

The most difficult phase will be the meeting with the fast moving comet Churyumov-Gerasimenko. In May 2014 Rosetta should reach an orbit around the planet. Churyumov-Gerasimenko is a short periodic comet which recurs every 6,57 years. It was discovered in 1969 by Klim Churyumov (University of Kiev, Ukraine) and Svetlana Gerasimenko (Insitute of Astophysics Dushanbe, Tajikistan). Two approaches to Jupiter in 1840 and 1959 changed the comets orbit from initially 4,0 AU perihelion distance to 1,28 AU. It belongs to comets of the so called Jupiter family (with the aphelion, i.e. the most distant point, at the Jupiter orbit) which is a group of short periodic comets in the Solar System.

Rosetta will follow Churyumov-Gerasimenko on its orbit and meet it in 2014. The rendezvous shall happen in a distance of 4.8 AU from the Sun and in May 2014 Rosetta will take to an orbit around the comet and go along with it for 17 months. Because there is only few knowledge about Churyumov-Gerasimenko and neither its size nor shape nor mass are well known, the approach will be quite difficult. After choice of a suitable landing place, one month after starting mapping the comet in approx. 3.25 AU distance to the Sun, the orbiter will send a lander (Philae lander) of 100 kg weight to the comets surface. Due to the very low gravity, the landing speed must be very slow (1 m/s), otherwise the lander would bounce from the comets surface and vanish into space. Simultaneously the spacecraft will carry on orbiting the comet and follow its changes for more than 14 months. In this time Sun will have started to evaporate parts of the comet nucleus and the surface of the comet will outgas. Here one can investigate the behavior of a comet during approach and department (perihelion passage) and at its closest distance to the Sun for the first time.

Primary aims of the Rosetta mission:

The orbiter actual load consists of twelve experiments to investigate the comet nucleus and the gas and dust cloud surrounding the comet. Beyond that the lander actual load provides the possibility to analyze the core surface and the structures below at close range. The following tables show the experiments of the Rosetta orbiter and the actual load of the lander.

Further information on the ESA-website