Space telescopes like CoRoT, Kepler and PLATO use the transit method to search for exoplanets.

Why does it have so many benefits to use space telescopes to search for exoplanets?

It is the lack of an observing disturbing atmosphere and the independence of day and weather. 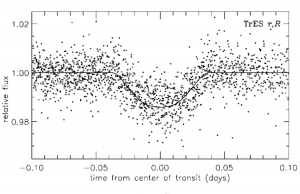 The transit method is also used from Earth to search for exoplanets (e.g. TrES, OGLE, WASP, SuperWASP). However due to the disturbing atmosphere the resolution of the light curves is only sufficient to discover large Jupiter-like gas giants. Figure 1 shows a phase stacked light curve with the transit of the Jupiter-sized planet TrES-2b orbiting the star on a 2.47-day orbit. This light curve was monitored with a ground based telescope. The Transit with a depth of 1% is clearly identified. However, it is obvious that the resolution is not sufficient to detect the transit of an Earth-like planet with a hundredth of that depth.

Figure 2 shows the same transit this time monitored with the Kepler space telescope. Without an atmosphere the noise of the light curve is reduced by a factor of 100. This resolution is sufficient to detect Earth-like planets. The high resolution is also useful to study variabilities of stars. Therefore, these space telescopes are also used to study stellar pulsation, star spots and outbreaks of various stars.

To search for exoplanets, one or more telescopes with large field of view are used. Large star Fields including 10000-100000 stars can be observed simultaneously using CCD cameras in the optical (or near infrared).  Images are taken in seconds or minutes intervals regardless of day / night change or weather. Then the light curves of individual stars are generated from these images by using masks. These light curves are filtered using computer algorithms and automatically searched for transits. The planet candidates found in this manner are then usually observed with ground-based telescopes, to fully characterize the planet.

Three German institutions were involved in this mission:

Beside a countless number of planetary candidates and 35 confirmed planets CoRoT discovered the first rocky planet (CoRoT-7b). Unfortunately, the telescope went out of service at the end of 2012 due to a technical failure.

2009 NASA launched the space telescope KEPLER which was dedicated for the search of exoplanets.

Unfortunately, also the Kepler telescope experienced a technical failure in 2013. In 2014 the mission now called K2 was resumed using a different observing strategy. Currently K2 is the only active space telescope dedicated for the search of exoplanets. RIU-PF is searching for exoplanets in K2 light curves as part of the KEST collaboration.

Through the success of these two telescopes other missions are planned for the future:

CHEOPS is the first S-class mission (small) from ESA to be launched in 2017. The telescope will be mainly used to determine the radii of exoplanets from light curves that have been discovered before with the RV method.

The “Transiting Exoplanet Survey Satellite” (TESS) is a new NASA mission to be launched in 2017. Four telescopes are mounted on this satellite. 500,000 stars in different star fields will be observed during the mission. NASA has selected brighter targets in contrast to the Kepler Mission. Therefore, more exoplanet candidates are suitable for follow-up observation with ground based telescopes. So a better characterization with determined masses is possible. TESS is also used to select targets for the James Webb Space Telescope (JWST).

The James Webb Space Telescope (launch 2018) is the official successor of the Hubble Space Telescope and will be equipped with a 6.5 m main mirror. The telescope will observe in the near and mid-infrared spectra and will be also equipped with a powerful spectrograph. The telescope has been developed under the direction of NASA in cooperation with other States as well as the ESA. The development and maintenance of this powerful telescope is expected to cost $ 8.8 billion (JWST Advisory Committee April 2014). This powerful telescope is used for many different astrophysical objectives. Part of the available observation time however is dedicated to the search and observation of exoplanets.

PLATO (“Planetary Transits and Oscillations of stars”) is a space telescope dedicated for the search of exoplanets planned by ESA. It has been selected as a M-class mission (medium) in February, 2014. It is headed by Heike Rauer from the DLR Institute of Planetary Research, Berlin. It will monitor up to 1.000.000 different stars covering most of sky with the 32 cameras. Two fields

The Rhenish Institute for Environmental Research, Department of Planetary Research is involved in the development of this mission. The launch of PLATO is planned for 2022-2024.